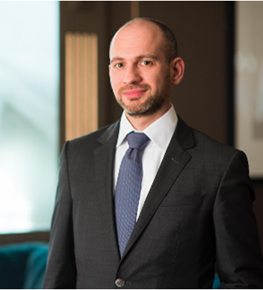 Laurent Schauder was appointed as General Manager for Hyatt Regency Sofia in March 2019 after having spent the past three and a half years in London as Hotel Manager of Hyatt Regency London – The Churchill.

Originally from France, Laurent started in the hospitality industry 18 years ago after graduating from the Glion Hotel School in Switzerland and has worked and lived in a total of ten different locations.

His travels have led him to work in Belgium, the United States, Spain, Switzerland, Azerbaijan, France, Chile and the United Kingdom, where he held various managerial positions and took part in two hotels pre-openings.

When asked about his new challenge in Bulgaria, Laurent said that he is very excited about this new chapter in his life and that it is a great honour to have the opportunity to open the first Hyatt hotel in Bulgaria.

The hotel is ideally located in the heart of the Bulgarian capital on Vasil Levski Square. Guests will be a short walking distance from the National Assembly, which houses the country’s parliament, as well as many of Bulgaria’s cultural institutions and tourist attractions, including the Monument to Vasil Levski, Cathedral Saint Alexandar Nevski, National Academy of Arts, SS. Cyril and Methodius National Library, and Sofia University.

Hyatt Regency Sofia will deliver on the contemporary expectations of guests and meeting planners. The 183-room hotel will feature an Italian New York style restaurant, a lobby lounge and market as well as a rooftop bar and rooftop event space with unrivalled views of the city. The hotel will serve as the perfect venue offering 1,200 square metres of flexible meeting and event facilities. A fitness centre and spa will further support the well-being of guests.

At Hyatt, “We care for people so they can be their best”. This is demonstrated in our values of Respect, Integrity, Humility, Empathy, Creativity and Fun.